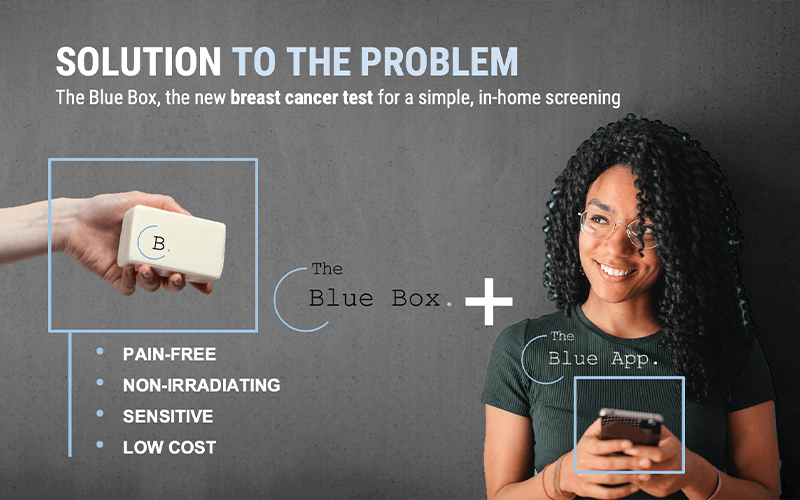 The Blue Box is a biomedical device for pain-free, non-irradiating, low-cost, in-home breast cancer testing – just by introducing a urine sample in a box! Our AI-based algorithm reacts to specific urine metabolites and outputs a classification rate of >95%.

During my undergrad years, I came across a study by the CDC reporting almost 40% of women skipping the mammogram breast cancer screening (41% due to pain), potentially resulting in 1/3 cancers detected too late, and thus worse survival chance for women. This frustration motivated me to discover that 93.55% of breast cancers diagnosed by a mammogram are “false alarms” (Catalan Department of Health). Finally, although a single radiation dose is not harmful, yearly exposure to a mammogram increases breast cancer risk itself. Consequently, there exists a need for a pain-free, accurate, non-irradiating, low-cost, in-home breast cancer test.

A household owning The Blue Box can have all its female members tested at their desired frequency and convenience. After creating a profile at The Blue App, the user just needs to collect some urine in a plastic container and subsequently place it inside The Blue Box. Then press the “start” button in the app. During the 30 following seconds, the 6 chemical sensors inside The Blue Box (in direct contact with the urine) will start reacting to certain targeted breast cancer biomarkers – if any. The captured signal will then be sent from The Blue Box to the cloud, where our artificial intelligence algorithm is run. Once our algorithm has reached a diagnosis, it will be sent back to the user’s phone and displayed in the app. In other words, The Blue Box is a change in the way society fights breast cancer. As opposed to the current painful and inconvenient routinary procedure that oftentimes leads to anxiety, The Blue Box enables women to get self-tested at home.

In October 2017 I started developing the 1st prototype of The Blue Box as my biomedical engineering bachelor thesis at the Universitat de Barcelona. The thesis proved the hypothesis that “the metabolite analysis performed by The Blue Box is sufficiently significant to discriminate control from breast cancer class”. To do so, 90 urine samples were collected at a hospital, and diagnoses were performed with 75% sensitivity. This prototype cost €30 ($35). With the ultimate goal of bringing this solution to all women in the world, I then moved to California, which seemed the right place to start pursuing this dream. Here at the University of California Irvine, I pursued the master of Embedded Cyber-physical Systems, where I met my friend Billy. He soon got motivated to bring in his computer science background. Together, we developed the 2nd prototype (our master thesis). We continued tackling the same set of cancer biomarkers, but started making use of artificial intelligence, and deployed a cloud server that allowed a much powerful algorithm to be run. These enhancements led to a classification rate of >95%. Now we not only enjoy working as a team but are also moved by the same passion: Giving every woman in the world the possibility to prevent a deadly late-stage breast cancer.

HOW IT IS DIFFERENT

In April 1989, Dr. Williams and Dr. Pembroke from King’s College Hospital, London reported a case in The Lancet about a dog who was licking a mole in its owner’s leg. The mole was shown to be cancerous, saving the patient’s life. This event proved that cancer causes metabolic changes, thus altering the body’s taste. Since then, an increasing number of publications have been seeking the definitive set of breast cancer biomarkers. This would lead to an early-stage metabolites-based cancer test. Nonetheless, there does not exist a general consensus among authors yet. We, however, followed a different approach to the challenge – based on engineering rather than experimental medicine. We have studied the dog’s taste buds and the sensory neurons they connect to and realized what makes them fire a signal. We then decided that if the dog was able to feel it, so was our Arduino microprocessor. And so we mimicked the dog’s sensory system into an AI-based software.

This project seeks to catalyze change towards women’s needs being fully met in healthcare systems worldwide. To do so, our next immediate goals are the following: ​Goal ONE: To patent our technology and working principle. To found a business entity to own the patent. Goal TWO: To conduct larger human studies, i.e. to further test the device with 300 patients with cancers at an earlier stage. The successful completion of goals 1 and 2 are the prerequisites of goal 3. Goal THREE: To apply for an SBIR (USA government) grant. Goal 3 is crucial for The Blue Box to pass medical regulatory affairs approval (FDA) and subsequently reach the market.

The Blue Box team has just started seeking funding to afford both the patent application and our next human studies. So far I have earned a nomination to the Biomedical Engineering class of 2018 bachelor thesis contest of my university. I was awarded a prize at the contest “People who love what they do”, by Argal.